Making $ense out of Personal Finance, Our Thoughts and Perspectives

Making $ense out of Personal Finance,Our Thoughts and Perspectives is our forum of discussion to empower and educate readers in various facets of their lives to assist in their pursuit of personal and financial success. 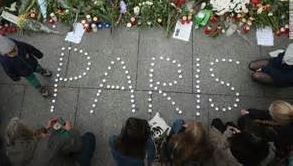 As I was flying home from attending the Schwab conference in Boston Friday night, I happened to be on the flight that had personal television screens. I became a captive audience to all the terror and devastation that was taking place in Paris. For six hours I watched as the death toll climbed and the newscasters repeated the same information, I couldn’t change the channel to a lighter form of entertainment feeling as if I needed to somehow experience it along the French people. It was a bit surreal as they kept saying that this was France’s 9/11, and knowing I was on an airplane that had left from an airport from which two of the 9/11 airplanes had taken off.  I was struck by a segment where Geraldo Rivera spoke live to his daughter who was studying abroad, and had been in the Soccer Stadium when the first bombs went off.  Her fear was palpable, and watching him almost speechless asking her if she was alright and telling her he was coming to get her. I thought of all the families in Paris that night and what they must have been going through.

This morning I saw a video of an interviewer talking to a father and son at one of the memorials for the victims.  The little boy was probably around five and had said to the interviewer that now he would have to move because the mean men with guns would hurt him. His father said that they would not have to move, and that the flowers would fight the guns, to which the little boy questioned “the flowers and candles will protect us?” Both the interviewer and father said yes. It was a poignant moment when you witness adults trying desperately to shelter a child’s innocence. But, when I pondered the conversation, it is true.